Tickets: Only 22 seats are available for each performance, and a complimentary coffee, tea & cake reception with the artist(s) will follow. With the limited seating, we aim to create an intimate, exclusive venue to celebrate the arts. To purchase tickets, email us at info@sivarulrasa.com or call the Gallery at 613-256-8033. Please join our notification list to receive early notification of future events.

Made in Canada: New Music for Guitar 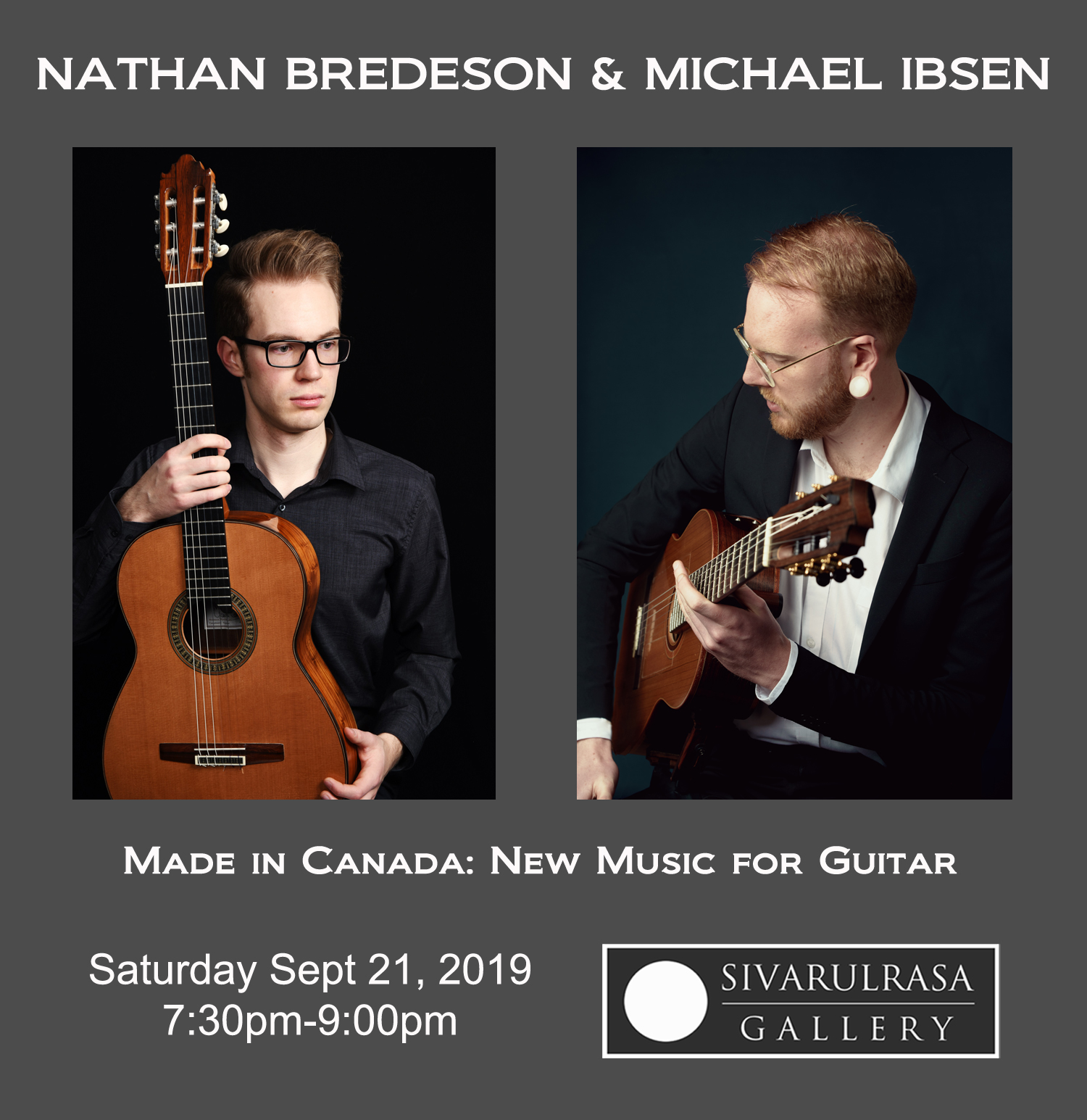 On Saturday, Sept 21, 2019, Sivarulrasa Gallery is pleased to present Nathan Bredeson and Michael Ibsen, Made in Canada: New Music for Guitar, a classical guitar concert.

Nathan Bredeson and Michael Ibsen are two exciting up-and-coming Canadian musicians who are gaining international acclaim for their music-making on the guitar. Made in Canada: New Music for Guitar is their Ontario tour celebrating Canadian music for solo guitar and guitar duo. Their tour, which includes performances in Kingston, Almonte, Ottawa, Toronto, and Hamilton, features music by a wide range of Canada’s brightest living composers, written for or commissioned by Canadian guitarists, showcasing the richness and diversity of the repertoire.

Doors open: 7:15pm. A dessert reception with the artists will follow the performance.

About the artists: Nathan Bredeson is an award-winning guitarist and composer who completed his Master of Music degree at the University of Wisconsin-Milwaukee under the tutelage of the Cuban guitar virtuoso Rene Izquierdo. He has been featured in CBC Music’s “30 Hot Canadian Classical Musicians under 30”. He has placed in several national and international guitar competitions and his composition ‘Astral Projection’ took first prize in the 2016 Ottawa Guitar Society Composition Competition.

Michael Ibsen has performed as a soloist and chamber instrumentalist across Canada, the northwestern United States, and the Netherlands, holds a Master of Music degree from UBC in Vancouver, and now studies at Conservatorium Maastricht in the Netherlands with Carlo Marchione. Michael works to expand the guitar repertoire through transcriptions and commissioning new music, which is why he gravitates especially towards modern, contemporary, and baroque music. 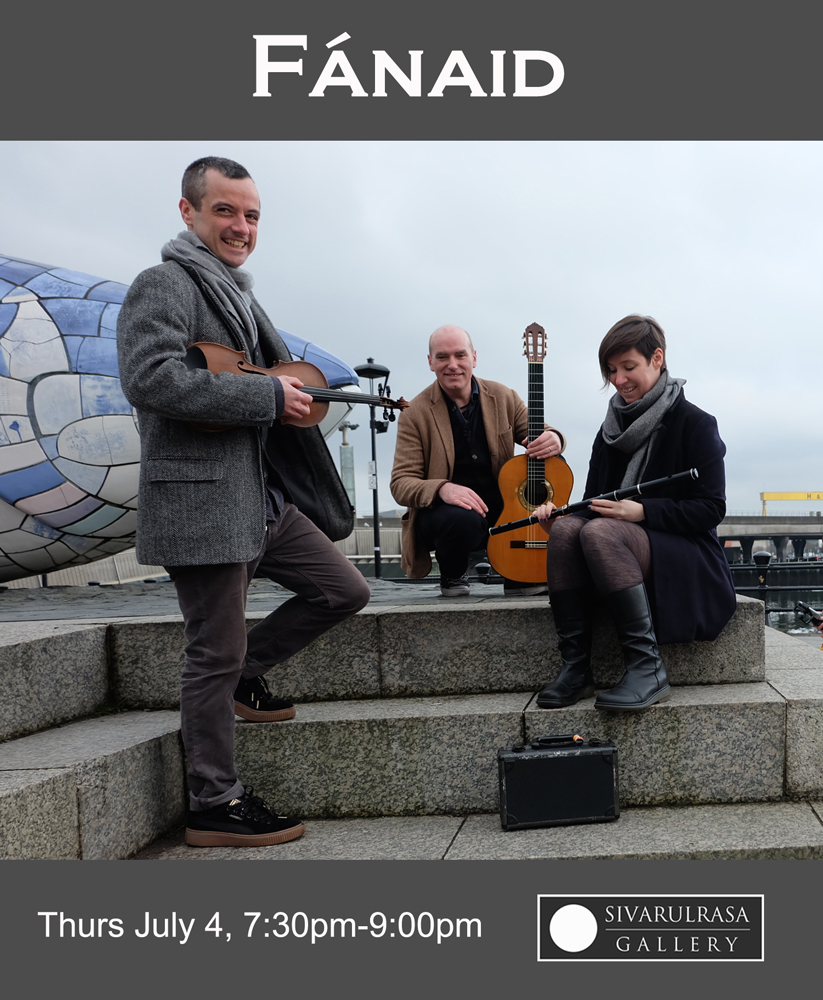 On Thursday July 4, 2019, Sivarulrasa Gallery is pleased to present Fánaid, an Irish traditional trio, for an unforgettable evening of acoustic music and song.

From County Down in Ireland, Fánaid have spent many years gathering local songs and music. Traditional songs often present an informative perspective on shared history; tales of lived experiences, significant events and communal hardships are passed down from generation to generation often wrapped in subtle metaphors and catchy melodies. Fánaid’s performance at Sivarulrasa Gallery will explore the rich song tradition associated with the linen industry both before and after the industrial revolution and its impact on the lives of the working people. The songs will be interspersed with lively jigs, reels and hornpipes as well as more reflective slow airs and solo pieces.

About the artists: Fánaid are a group of three musicians who met by chance in a queue for an Irish festival and have been playing music together ever since. They bring together fiddle, wooden flute and classical guitar and their music is drawn from their native province of Ulster in the north of Ireland.

Kevin McCullagh is a fiddle player, DJ and sound artist from Belfast, where he has been an active member of the traditional music scene for over 20 years. His fiddle playing draws inspiration from the music of Donegal where he spent much time as child.  He holds a Masters in Sonic Arts from Queens’ University of Belfast and in 2018 collaborated with fiddle player Conor Caldwell, appearing on his album ‘To Belfast…’.

Fióna Ní Mhearáin is a flute player, singer and fluent Irish speaker from Belfast. She sings in both Irish and English and her style is influenced by the northern singers such as Maurice Leyden.  Taught by Davy Maguire, she has a love of traditional flute playing, particularly the strong and punchy Belfast and Northern flute styles.  She is a member of the traditional three piece female harmony group Sí and the contemporary vocal choir HIVE.

Paddy Morgan is a guitar player who has developed a unique style of guitar accompaniment that seeks to remain faithful to tradition while exploring new techniques for the guitar in Irish music drawn from a diverse background including flamenco and jazz. He has recorded a solo album of original compositions and has also released albums with singers Mai Hernon and Rosie Stewart and most recently with acclaimed traditional trio d’Bize.

Transatlantic Guitars: From the Old to the New World 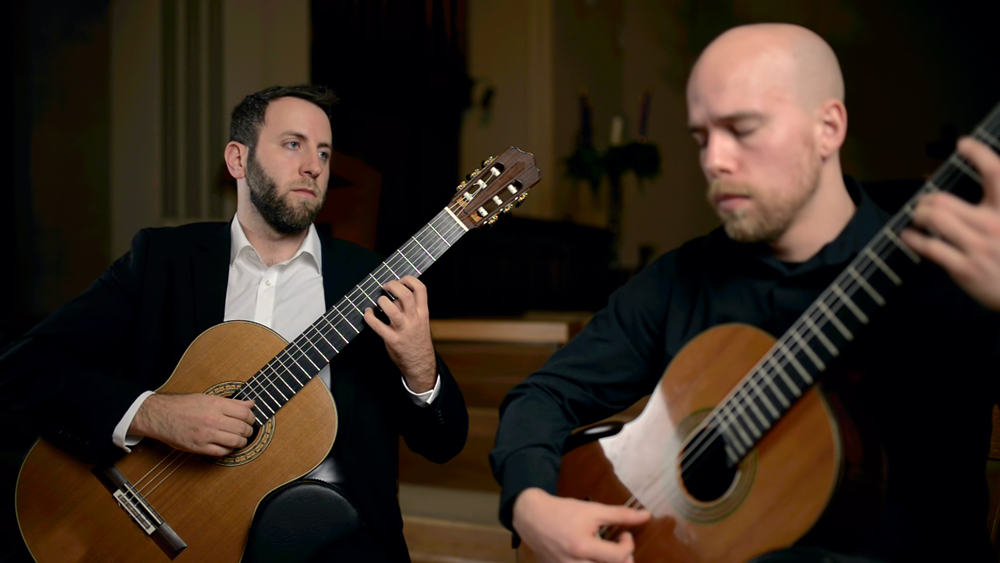 On Sept 22, 2018, Sivarulrasa Gallery is pleased to present a duo concert, Adam Cicchillitti and Steve Cowan, Transatlantic Guitars: From the Old to the New World. Get ready for a mesmerizing evening of music in our intimate art gallery setting by two superbly talented classical guitarists!

About the Artists: Considered among the most promising guitarists of their generation, Adam Cicchillitti and Steve Cowan form an exciting and unique duo that focuses on expanding the contemporary classical guitar repertoire through commissions and collaborations with living composers.

Currently completing doctorates at McGill University with acclaimed guitarist Jérôme Ducharme, Cicchillitti (Dmus., 2022) and Cowan (Dmus., 2019) present daring, virtuoso programs featuring new music for the guitar from prominent Canadian composers as well as a mix of their own arrangements of impressionist works from 20th-century France and Spain.

Having recently collaborated on an album of Spanish guitar music under the Analekta label, these two long-time friends and award-winning guitarists are touring the Canadian East with Debut Atlantic in 2018. Their next album with Analekta will feature the music of multiple generations of celebrated Canadian composers and will be released in August 2019. 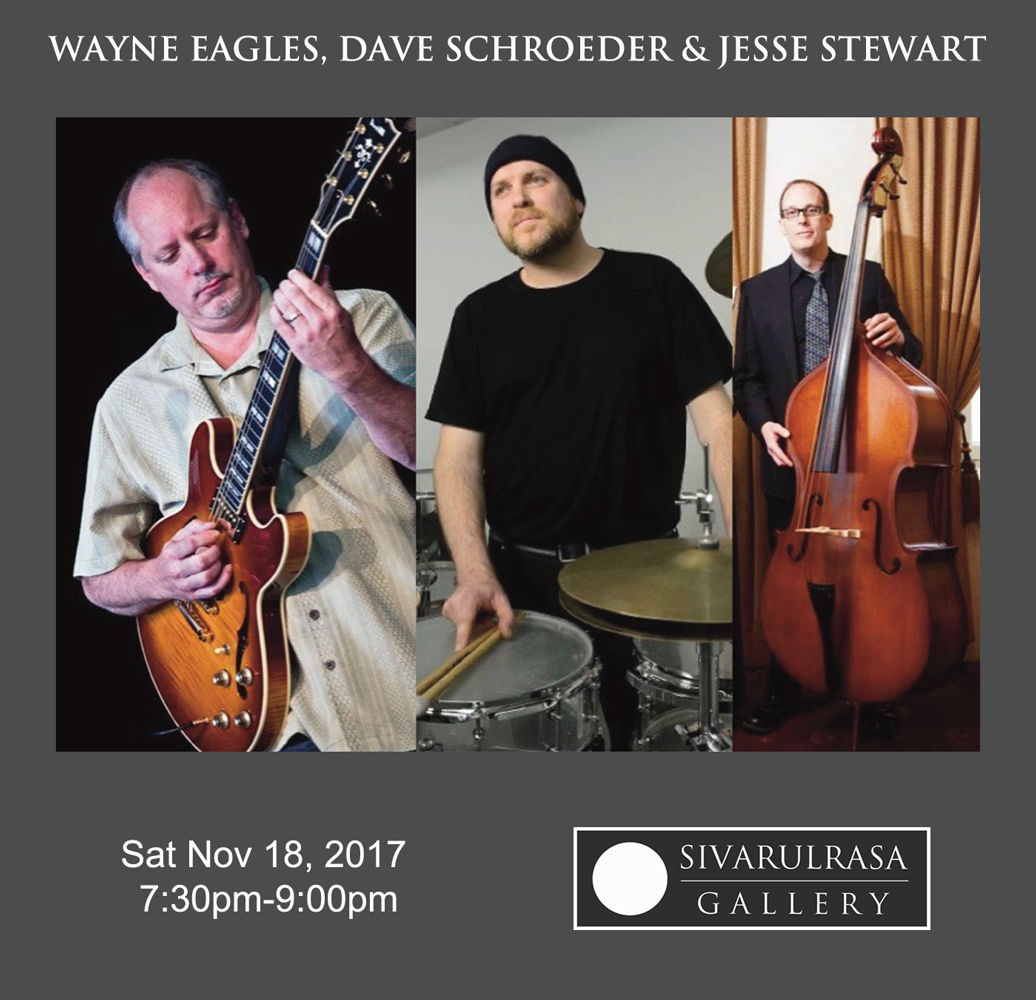 Sivarulrasa Gallery is pleased to collaborate with JazzN.ca to present the Wayne Eagles Trio, featuring Wayne Eagles on guitar, Dave Schroeder on upright bass and Jesse Stewart on percussion.

Doors open 7:15pm. A reception with the artists will follow the performance.

About the Artists: Wayne Eagles is known for his unique guitar style, which incorporates diverse influences from textural soundscapes and free jazz to old school fusion and progressive rock. A musician for over four decades and a professional guitar instructor for more than two decades, Wayne Eagles’ education includes undergraduate and graduate Music degrees complimented by many years of private study, research and master-class attendance. He is a performance instructor and ensemble director at Carleton University, Ottawa.

Dave Schroeder is a bassist, guitarist, composer and educator based in Ottawa. In 2011, he received a Doctor of Musical Arts degree from the University of Miami, becoming the only Canadian electric bassist ever to attain this honour. He currently teaches music at Carleton University, Ottawa, remaining active as a session bassist and guitarist.

Jesse Stewart is an award-winning composer, improviser, percussionist, visual artist, instrument builder, researcher, writer, educator, and community activist dedicated to re-imagining the spaces between artistic disciplines. He lives in Ottawa, where he is an Associate Professor of music in Carleton University’s School for Studies in Art and Culture and an adjunct professor in the Visual Arts program at the University of Ottawa. 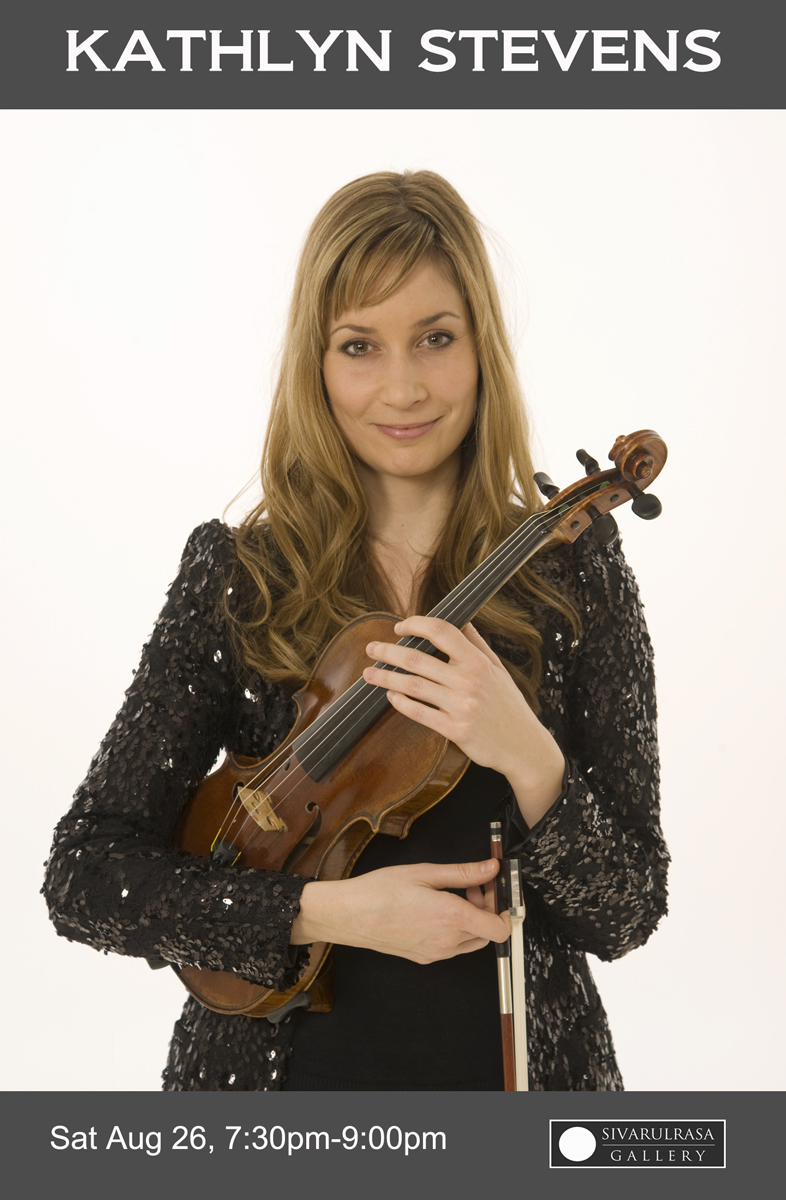 Doors open 7:15pm. A reception with the artist will follow the performance.

She has performed with the Canadian Opera Company, the National Arts Centre and the Winnipeg Symphony. She has played with Ottawa’s premier chamber orchestra, the Thirteen Strings. She also performs regularly with Consortium Aurora Borealis as well as the Martin Blanchet Jazz Quintet.

Four Centuries of Love and Longing 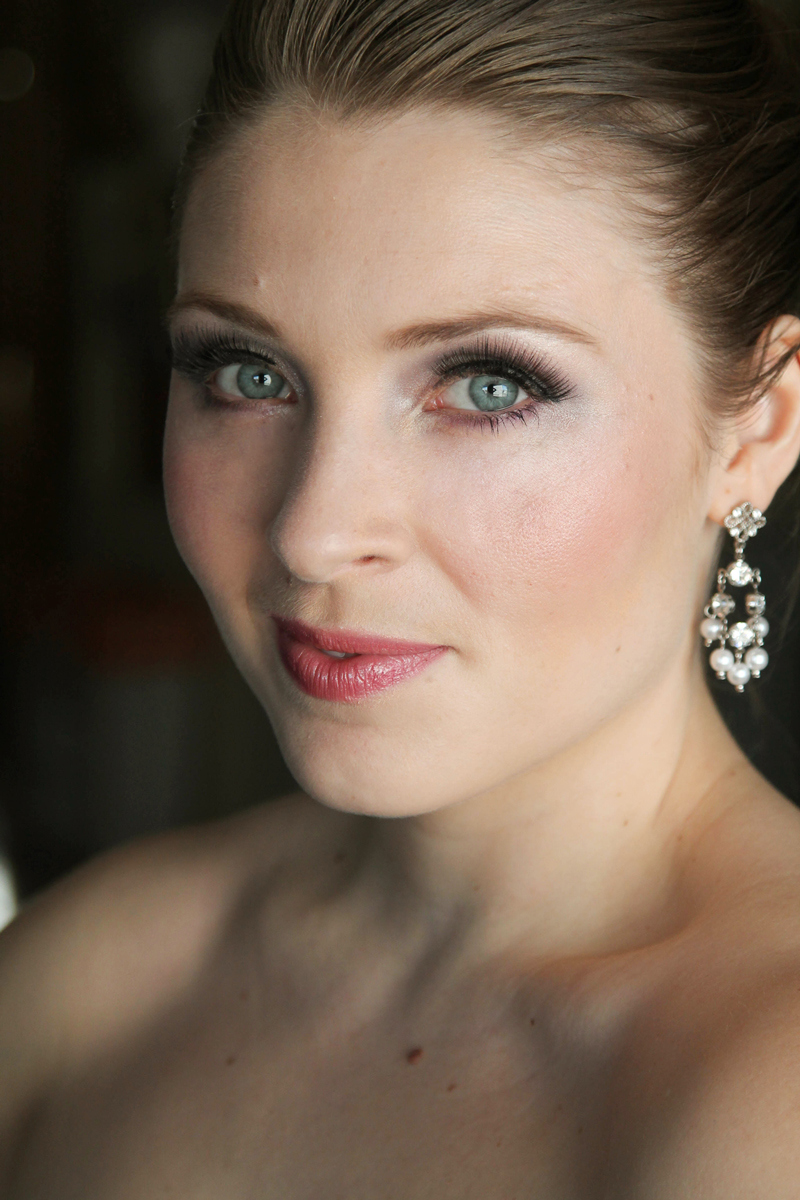 Sivarulrasa Gallery is pleased to present Four Centuries of Love and Longing, a classical music concert with voice and guitar. This evening of art song and arias showcases a dynamic set of pieces, arranged and composed for guitar and the soprano voice. It includes works by many great composers, including Purcell, Schubert, Grieg, Faure, De Falla and Argento.

Love has always been a great inspiration to artists and this program delves into the many ways love manifests in our lives, whether through the calmness it instills, the frenzy of a burning passion, the loyalty of devotion, or the emptiness of betrayal.

About the Artists: Finnish-Canadian soprano Emili Losier began singing as a child with the Royal Conservatory of Music and, after performing her first role as Hodel in The Fiddler on the Roof with the Chilliwack Performing Arts Society, she knew she wanted to be trained as an opera singer. This brought her to Finland, where she completed a Bachelor of Music degree, an Artistic Diploma in Performance and a Master’s degree in Opera from the Sibelius Academy in Helsinki, Finland. She continues to give solo concerts and works with orchestras in Canada and Finland.

Daniel Ramjattan began performing the guitar when he was ten years old in Stratford, Ontario. He has performed in many concert venues in Canada and the U.S. He has won several prizes and awards, and placed as a finalist in many national and international competitions, including 2nd place in the 2016 FCMF National Music Competition, held in Edmonton, Alberta. He holds a Master’s degree and a Bachelor of Music degree in classical guitar performance from the University of Ottawa. He will be pursuing a Doctor of Musical Arts degree at the University of Toronto in Fall 2017.

Through time and space: A portrait for guitar 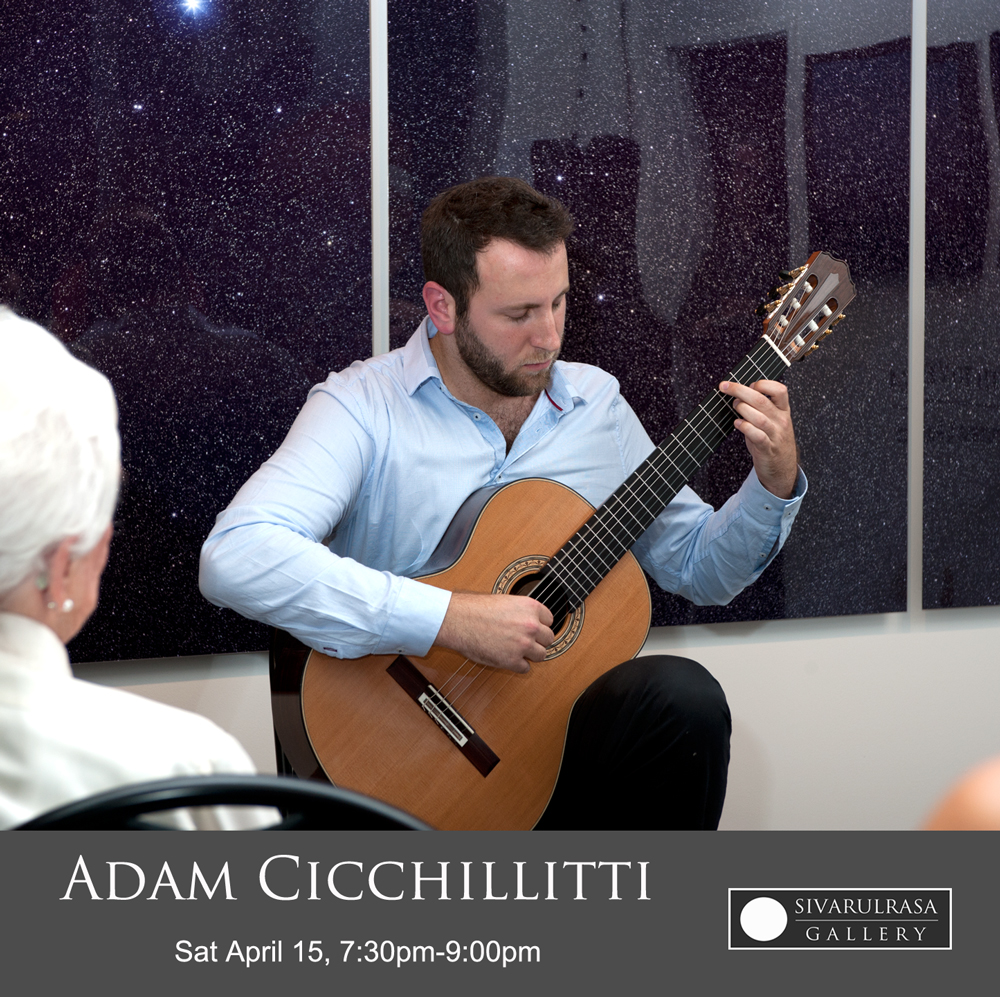 Adam Cicchillitti mesmerizes with a repertoire spanning over 300 years of music, from Bach and Scarlatti to the nationalist folk music of Spain, to his own compositions, and culminating with modern North American works that continue to push the boundaries of the instrument.

Doors open at 715pm/performance starts at 730pm/coffee, tea & cake reception with the artist will follow.

About the artist: Originally from Montreal, classical guitar soloist Adam Cicchillitti’s competition successes have placed him on concert stages across Canada and the United States. Adam has performed as a featured soloist at Ottawa’s premier guitar event Guitare Alla Grande and at several of Eastern Canada’s prominent concert halls. Most recently in 2016, Adam and baritone Philippe Courchesne-Leboeuf toured the Canadian east coast with les Jeunesses Musicales Canada.