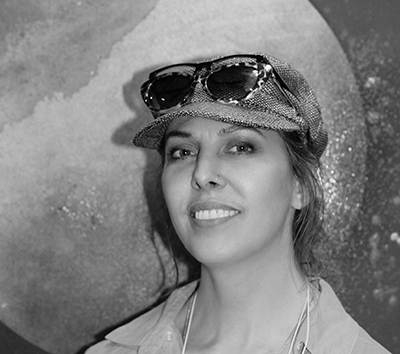 Marina Raike’s studio practice ranges from skulls to abstract works inspired by geology and the natural world. She completed her Bachelor of Fine Arts degree at the Ontario College of Art and Design University in 2006.

Her current body of work experiments with organic materials and cultural artifacts, using minerals from Ontario, Québec and Labrador, juxtaposed with collages of historical imagery and written texts. The historical imagery recalls the 19th and 20th centuries using symbols of a time just beyond living memory, while the minerals are naturally formed from ancient times. “In my mind, there are many connections between natural systems, forgotten ancestors and our own inventions,” she says. “Looking back can give us a broader perspective for facing whatever lies ahead.”

Marina Raike’s work has appeared in the TV series ‘Suits’ and at Ontario’s Queen’s Park. She has exhibited in solo and group exhibitions in Montreal, Toronto, Ottawa and internationally, and her art is held in private collections in Canada, the United States, and Japan.

See more works by Marina Raike on our Virtual Gallery