Originally trained in law, Sanjeev Sivarulrasa holds an Hon. B.Arts.Sc. degree (Arts & Science Program, McMaster University), an LL.B. degree (Osgoode Hall Law School, York University), and an LL.M. degree (Faculty of Law, University of Ottawa). Sivarulrasa began observing the night sky with telescopes 19 years ago, travelling to dark skies in Ontario and Quebec for visual observations and photographic work. He sees the pristine night sky as a meditative space that fosters awareness and creativity. A former member of the Royal Astronomical Society of Canada, he was named “Observer of the Year” by its Ottawa Centre in 2010.

Sivarulrasa’s first solo exhibition The Still of Night was presented by the Cube Gallery in Ottawa in 2011. His solo exhibition Night Light was presented by the City of Ottawa at the Karsh-Masson Gallery in 2013. Sivarulrasa published his book Vanishing Stars: Unravelling the Appropriation of Art by Science in 2013. An active advocate of the arts, he has served on the Board of Directors of Canadian Artists’ Representation / Le Front des artistes Canadiens (CARFAC National), the music school Ottawa Suzuki Strings, and the Mississippi Valley Textile Museum. Since launching Sivarulrasa Gallery in Almonte in 2014, he has curated several exhibitions showcasing the works of contemporary Canadian artists from across Canada.

See more works by Sanjeev Sivarulrasa on our Virtual Gallery 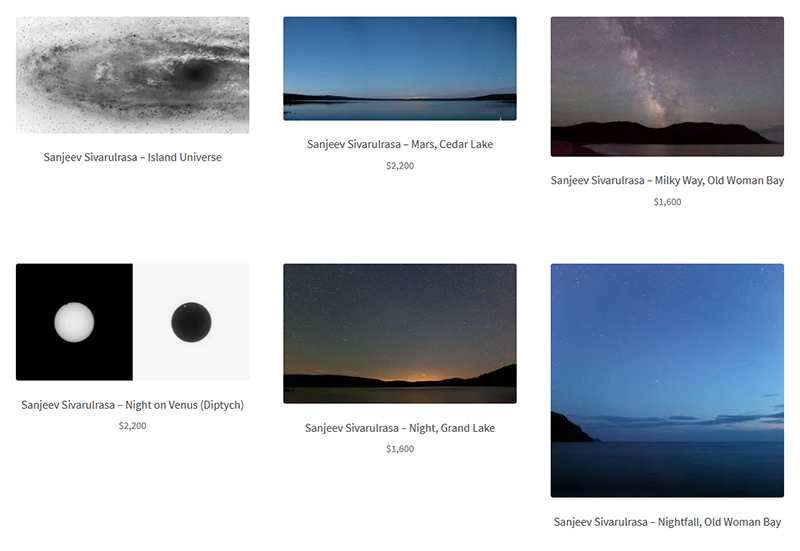